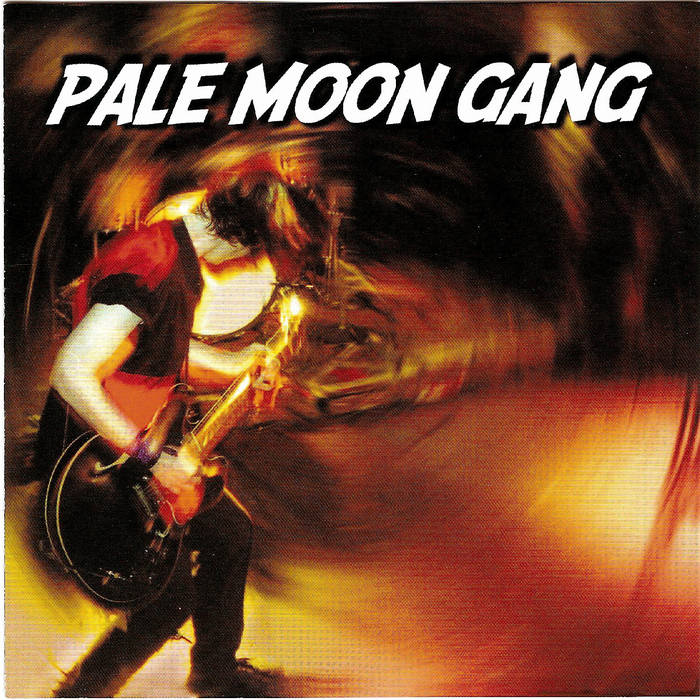 The Big Takeover review of PALE MOON GANG debut CD
PALE MOON GANG
(Fast Loose)
With so much of the Big Apple (especially Manhattan) seemingly losing its soul of late, it's good that there are local bands like this trio to bring back some of the grit and spirit of old New York. Richard Dev Greene's meaty, overdriven guitar riffs combine with the pounding rhythms of bassist Luke Miller and drummer Brian Wolfe to form an explosive, tight 'n' crunchy attack that brings to mind recent incarnations of The New York Dolls and Stooges. In fact, the band even do a cover of their hero Iggy Pop's 1979 LP title track 'New Values', and kick up agood head of steam doing it. And with potent, melodic originals like 'Yeah X 3' and 'Talkin' To Myself (To
Get By)', this debut is a complete knockout.
(palemoongang.com)


411 mania - review of PALE MOON GANG debut CD
PALE MOON GANG
(Fast Loose)
The 411: Pale Moon Gang is a great debut. It showcases both youthful energy and a mature understanding of the punk scene, something that no other indie bands seem to be doing today. The album isn’t exactly commercial-friendly, but people who dig punk (or who dug it back in the day) will find the songs fun, appealing and dead-on in their NYC punk scene vibe. Pure raw power.

There's been a few reviews that I've written where I said something about how "they don't make 'em like that anymore". I'm usually talking about an older release and my comment comes from the fact that, back in the day, music actually meant something. It wasn't the business it is today. It was more of a feeling ... a feeling which Pale Moon Gang seems more than happy to tap into. This is rock'n'roll slash punk that reminds me of Johnny Thunders, early Rolling Stones, Iggy Pop, The Clash and anyone else who seemed to create music from the gut in order to throw it into the face of an audience that was more than willing to stand there fist in the air, screamin' for this style of music. It may be a new musical world, but this is old school, man. This is what I'm talkin' about. Not a lot of people will make 'em like this anymore. Luckily, for the people who happen to like a good musical kick in the face, Pale Moon Gang is willing to deliver. For those of you who refuse to grow up and accept all the crap that's floating around out there today ... crap they call music ... this is the release for you. This is the real deal. This album is fresh in my CD player and I'm already lookin' forward to their next release.

Pale Moon Gang are to be applauded firstly for their delivery of full-on,
boot-in-the-nackers hard-edged punk rock, and secondly for not attempting to dress it up in irony or spoof. Nope. The Darkness they are most definitely a million miles away from. And so it is on those terms that these three New Yorkers present us with ten testosterone fuelled tracks whose sole aim is to sniff out sex, drugs and rock'n'roll in their purest forms.

Although undeniably punk in attitude, their sound owes as much to hard rock thanks to Richard Dev Greene's abrasive riffs and searing lead breaks and the drive of a rhythm section comprising bassist Luke Miller and drummer Brian Wolfe. Tracks such as 'Yaeh X 3' and 'All The Nightcrawlers' share more in common with Thin Lizzy and AC/DC than they do The Clash or The Stooges. The Guns'n'Roses influence is even harder to ignore; as well as approaching their music from the same good time angle, the vocal delivery is at times so redolent of Axl Rose you'd be forgiven for thinking "Two Minute Fix' and 'Sweet Stuff Doc' are long lost G'n'R b-sides, and more than worthy of the name.

While opener "New Train Runnin'' sets a very high (and heavy) standard, the remainder is packed with the energy and aggression of a band who never mince their words, while aiming a healthy sneer at the world at large. If you like rock'n'roll and you like it loud then this is the album for you.

Bandcamp Daily  your guide to the world of Bandcamp